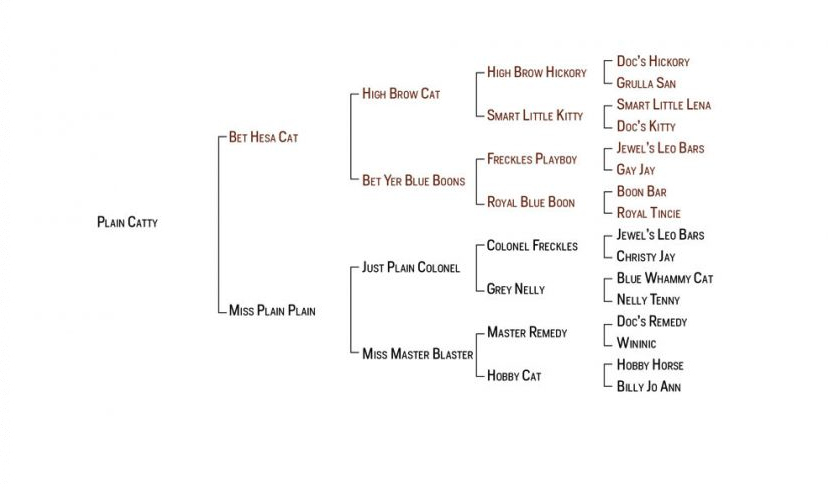 30 Oct In the Blood: Plain Catty

Plain Catty, a bay roan stallion, is this year’s National Reined Cow Horse Association (NRCHA) Snaffle Bit Futurity Open Champion. He was shown by Equi-Stat Elite $1 Million Rider Jake Gorrell. They had a 657.5 composite score, with a 214.5 in the herd work, 218 in the rein work and a 225 down the fence, to secure the winning purse of $125,000. Kevin Cantrelle is the horse’s owner and breeder.

Plain Catty (Bet Hesa Cat x Miss Plain Plain x Just Plain Colonel) has a pedigree that brings together two of the breed’s great nicks. These nicks then come together to form a nick of their own, utilizing a breeding pattern that is very prominent in the American Quarter Horse.

High Brow Cat has proven to be a great sire through his title as the all-time leading sire of cutting horses. But a review of the top 10 Open finalists in the 2017 NRCHA Snaffle Bit Futurity shows that he is moving into a new area as the paternal grandsire of reined cow horses. He is the paternal grandsire of seven of the top 10 finalists. These top 10 performers earned $397,125.

Bet Yer Blue Boons’ sire, Freckles Playboy, is the No. 4 leading sire of all time for cutting horse money-winners, according to Equi-Stat. He is the sire of horses with Equi-Stat reined cow horse records totaling $302,823, including Playboys Buck Fever ($62,246), an NRCHA Supreme Reined Cow Horse.

Boon Bar (Doc Bar x Teresa Tivio x Poco Tivio) introduces us to the next great nick in the pedigree of Plain Catty. Boon Bar ($12,325) won both go-rounds of the 1975 NCHA Futurity Open, but was sidelined by an illness and unable to make the finals of the Futurity.

Miss Plain Plain (Just Plain Colonel x Miss Master Blaster x Master Remedy) was shown in cutting and reined cow horse. She proved her versatility in 2004 and 2005 as the World’s Greatest Horseman Reserve Champion. She earned $97,687 in her own career, and she is now the dam of four money-earners that have won $176,278, including Peppy Plain Jane ($17,943).

Just Plain Colonel (Colonel Freckles x Grey Nelly x Blue Whammy Cat) earned $53,676 as a finalist in such events as the 1987 Bonanza Cutting 4-Year-Old Open. His foals have won greater than $1.7 million in a variety of events. His leading money-winner is Just Mister Dual ($144,199). Just Plain Colonel is the maternal grandsire of horses that have won more than $1.3 million. One of his leading grand-get in that division is Very Smart Smoke ($141,336).

Miss Master Blaster (Master Remedy x Hobby Cat x Hobby Horse) was primarily shown in the Novice division in cutting, but she was a finalist in the Reno Western 4-Year-Old Open. She earned $7,492, and she is the dam of horses that have won $133,284, with her second-leading money-winner being Missy Dual Master ($14,277).

Doc’s Remedy (Doc Bar x Teresa Tivio x Poco Tivio) tied for third in the 1976 NCHA Futurity Open, which was won by Colonel Freckles with Freckles Playboy as the Co-Reserve Champion. Doc’s Remedy and his full brother Boon Bar in the same pedigree gives us another collateral linebreeding.

When we look at the pedigree of Plain Catty, we see he is linebred to the Jewel’s Leo Bars/Rey Jay nick and the Doc Bar/Poco Tivio nick, as he carries those bloodlines through both the sire and dam.

When stepping back and looking at the pedigree, there is a breeding pattern known as “returning the blood.” When this breeding pattern exists, the horse is linebred by returning the blood of the common ancestors found in the pedigree of the foal’s dam back into the foal produced through the sire’s dam. This increases the influence of the sire’s dam on the foal being produced, as it is linebred through her to those common ancestors.