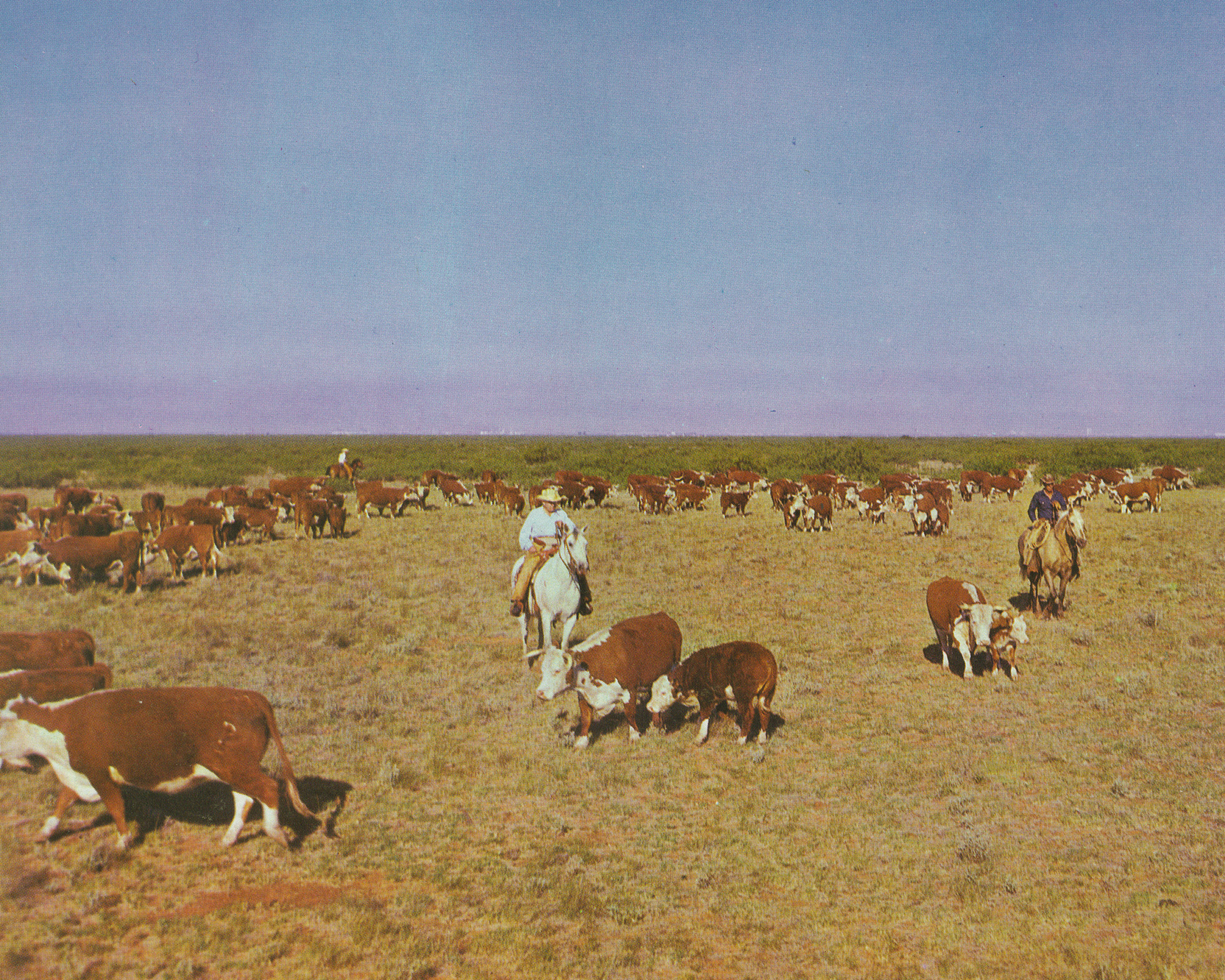 Some men have done more spectacular things in the ranching business that Roy Parks of Midland, Texas, but few can point to a more consistent record in building up a herd of Hereford cattle that is recognized from the range lands of West Texas to the Corn Belt States as cattle that can be depended upon to do their part in any beef making program.

Parks is always ready and willing to tell of the merits of Texas Herefords, but it took a lot of questioning to get him to be specific and tell of some of his personal experiences.

Everyone who knows, Roy Parks is fully aware that he is modest, good natured, courteous and a good host.  On a hot July day when his ranch was visited and he was being questioned, he frequently tried to dodge an answer by saying “Let’s skip that because a lot of men have done better than I have with their cattle.”

That was the only questionable statement he made during the entire day.

You can listen to Mr. Parks relate his experience without being fully convinced that he has given careful consideration to producing beef cattle on the range in West Texas, and that he knows a lot of answers to many ranching problems.

“It was in 1928 that I made my biggest mistake in the Hereford cattle business.  I had about 1200 head from yearling heifers and up.  I had never heard of a wet cow bringing as much as $100.”

“The late B.S. Walker of Breckenridge, a personal friend and my banker, visited me.  He had purchased a ranch in Shackelford County and he wanted me to price my cows.  I did not want to sell my cows and told him that if I named a price it would be an unreasonable one.  Mr. Walker insisted that I name the price and I told him it would be $100 for 2 year old heifers and up and $75 for yearling heifers.  Much to my surprise and disappointment Mr. Walker bought the yearling heifers, the two year old heifers, and the cows and then paid me $75 each for the heifer calves.  I also sold my steer calves that year off the cows to the Tarkio Company in Missouri for 12 cents a pound and they weighed 600 pounds.  It was an unheard of price for cows and calves, but I was sorry to see them go.”

“Then I bought 1500 heifer yearlings.  They were pretty good cattle, but I never was proud of them.  I kept them until they were three years old and sold them with their first crop of calves.”

“I then set out to get me the kind of herd that I wanted.  I bought the Scharbauer and Eidson heifer calves.  Some of the Ratliff and Bedford heifer calves and the Foy Proctor heifer calves, and several other small bunches of heifer calves.”

“ Then I found I had a bull problem on my hands.  I needed about 50 bulls.  I spent considerable time looking for good bulls and finally settled on buying 100 top bull calves out of 200 from the Banning-Lewis herd of Herefords at Colorado Springs, Colorado.  I weeded out these bulls to the 50 I needed and they did me a lot of good.”

“Next time I needed some more bulls I went back to Banning-Lewis and they had contracted their bull calves for a period of several years.  I wanted good registered bulls for my commercial herd of Herefords without paying too much money for them.”

“I purchased some bulls from T.B. Ellison of Fort Worth, some bulls from J.S. Bridwell of Wichita Falls and from Otto Fulsher of Colorado.  All of these bulls did my herd a lot of good.”

During this time Roy Parks had married Miss Jojo Evans and they had a son who was named Roy Parks, Jr.  Roy Parks, Sr., says he had an ambition to turn over to his son when he was 21 years of age one of the best commercial herds of Herefords in Texas.  With that in mind when Roy, Jr., was two or three years old his father purchasedhim 12 top registered heifer calves from B.N. Aycock of Midland.  When they were old enough to breed he put one of his top bulls with them.

Since the herd started, only one crop of heifer calves from it has been sold.  A load of good bulls from the Fulsher herd was used on these heifers with good results.  Roy, Jr., now has a bred of approximately 500 cattle of breeding age.  None of his cows has been registered, but practically all of his herd trace to the 12 registered heifers that were purchased on which nothing but registered bulls have been used.

Roy Parks, Sr. cared for the cattle without expense to his son.  From time to time lands adjoining the Parks Ranch were purchased with the proceeds from the sale of the offspring from the 12 heifers.  When Roy, Jr., returned from service in the Navy during World War II the father and son did a little land trading so as to better block up the land holdings of each.  Roy, Jr., got the attractive ranch headquarters his father and mother had built.  Each has his own herds of commercial herds but the two herds are operated as a unit.

Roy Parks, Jr., married Miss Harriet Price of Pampa and they have two charming youngsters, both girls.  They live on the ranch headquarters a few miles west of Midland.

Roy Parks, Jr., is an enthusiastic horse breeder, Quarter Horses by preference.  He has won a number of prizes with his horses at the major shows.  His father describes the horse business as a hobby, but one that has more than paid its way.

When Roy Parks, Jr., was a youngster he did not take to the idea of feeding baby beeves as a club project.  He was interested in horses.  When his father got him some horses he would rush to the ranch when school was out to care for his horses.

Mr. Parks purchased some horses from Tom Nance of Midland.  They were good mares but mostly Thoroughbreds.  In the lot were three mares of Quarter Horse breeding.  They were by Anti Pro.  Anti Pro was by John Wilkins and he was by Peter McCue.

The father – son combination soon discovered they were not producing the right type of horses.  They spent considerable time looking for a stud of the right type.  Jay Taylor of Amarillo gave the Parks an old stud sired by John Wilkins.  Then they began to produce Quarter Horses of the proper type.

After a visit to the King Ranch and having a look at the Quarter Horses being produced there, Parks says he was convinced they had the best lot of Quarter Horses he had ever seen.  Later Mr. Parks purchased studs sired by Macanudo, Wimpy and Peppy, all well know King Ranch studs.

The Parks father – son ranch combination concur in the belief that if you will be good to your cattle and use judgment in handling according to seasonal conditions, they will be good to you.  This has been the method they have used in acquiring their ranch land and herds of good Herefords.